We have found that two types of sliding window computations are extremely common in practice:

We designed Hourglass with these two use cases in mind. Our goal was to design building blocks that could efficiently solve these problems while maintaining a programming model familiar to developers of MapReduce jobs.

The two major building blocks of incremental processing with Hourglass are a pair of Hadoop jobs:

We'll discuss these two jobs in the next two sections. 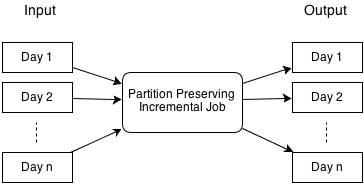 In the partition-collapsing job, input data that is partitioned by day is consumed and a single output is produced. If the input data is a page view event and the goal is to count the number of page views by member, then this job would produce the page view counts per member over the entire n days. 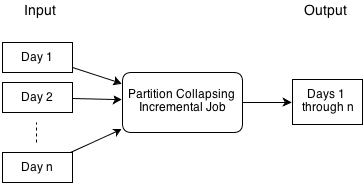 Functionally, the partition-collapsing job is not too different from a standard MapReduce job. However, one very useful feature it has is the ability to reuse its previous output, enabling it to avoid reprocessing input data. So if day n+1 arrives, it can merge it with the previous output, without having to reprocess days 1 through n. For many aggregation problems, this makes the computation much more efficient.

The Hourglass jobs are implemented as MapReduce jobs for Hadoop: 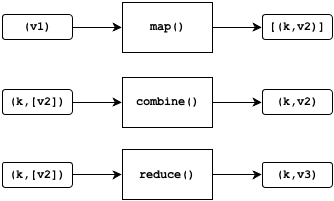 The map method receives values from the input data and, for each input, produces zero or more key-value pairs as output. Implementing the map operation is similar to implementing the same for Hadoop, just with a different interface. For the partition-preserving job, Hourglass automatically keeps the data partitioned by day, so the developer can focus purely on the application logic.

The reduce method receives each key and a list of values. For each key, it produces the same key and a single new value. In some cases, it could produce no output at all for a particular key. In a standard reduce implementation in Hadoop, the programmer is provided an interface to the list of values and is responsible for pulling each value from it. With an accumulator, this is reversed: the values are passed in one at a time and at most one value can be produced as output.

The combine method is optional and can be used as an optimization. Its purpose is to reduce the amount of data that is passed to the reducer, limiting I/O costs. Like the reducer, it also uses an accumulator. For each key, it produces the same key and a single new value, where the input and output values have the same type.

Hourglass uses Avro for all of the input and output data types in the diagram above, namely k, v, v2, and v3. One of the tasks when programming with Hourglass is to define the schemas for these types. The exception is the input schema, which is implicitly determined by the jobs when the input is inspected.